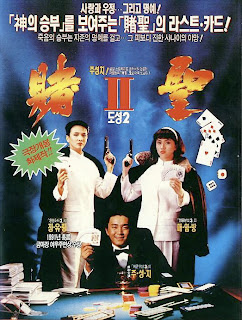 Ever since seeing Chow Yun Fat in God of gamblers I have been a sucker for HK gambling movies, I have seen most of them but I had never got around to Top bet, even though it is a sequel to a favourite of mine All for the winner . I watched the Joy sales dvd yesterday and although fun in places overall it was a disappointment overall, wasting a solid cast with thin characters and far too much mugging to camera (Ng Man Tat I'm looking at you). Stephen Chow who starred as Saint of gamblers in the original All for the winner has a cameo at the start of the film and returns briefly at the end but is missing for most of the running time, he is such a loss the writers decided to replace him with two characters, Anita Mui as his sister and Carol Cheng as a card cheat who becomes the queen of gamblers and although both are fine, neither is fleshed out enough and as a result neither are charismatic enough to carry the film in the way that Stephen Chow did in the original or Chow Yun Fat did in God of gamblers, this is the major problem with the movie as given more screen time, either actress could have pulled it off.
It is obvious that the film was made quickly and on a low budget and taking that into account it is a (barely) passable timewaster with a decent action scene, some fun gambling scenes and a few laughs along the way but it is nowhere near the best of the genre. The dvd looks and sounds about as good as it ever will as I cannot see this ever being remastered, and I don't think anyone will worry too much about that.
Posted by A hero never dies at 3:55 PM

I love gambling films too but they are pretty hit-and-miss. Thanks for the heads up on this one!

I watched this a few months ago and was equally underwhelmed. Like achillesgirl said, gambling films are hit and miss. Maybe they need to be reinvented? Poker King wasn't half bad.

Not seen Poker king yet, what are your favourite gambling movies?

"Winner Takes All"! A ridiculous early Wong Jing with Wang Yu in huge sunglasses and Patrick Tse as a spoof 007 character. haha!