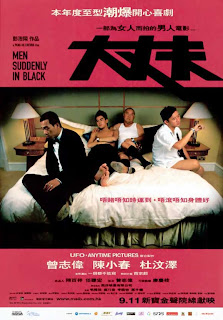 Finally got around to watching this, if you haven't seen it yet don't wait any longer, get it now. Pang Ho Cheung manages to pull off a mixture of intelligence and silliness brilliantly to create one of the funniest Hong Kong movies I have seen. The cast is fantastic, with Eric Tsang, Jordan Chan and Chapman To leading the way but the film is owned by the cameos from Tony Leung Kar Fai and Sandra Ng who are both hilarious in their small roles. The film is full of movie references with scenes lifted wholesale from Infernal affairs and there is an inspired tribute to John Woo and heroic bloodshed movies.

The dvd I watched was the Mei Ah HK disc, the worst aspect of the dvd are the terrible subtitles, some of the scenes were made nonsensical by mistakes in the translation and Eric Tsang's character name kept changing from scene to scene, apart from this the dvd is pretty good with the sound and image being fine. Highly recommended
Posted by A hero never dies at 1:20 PM

Such a fun film! Hope you can get past the subtitles. :(

after so many years, i think my brain just automatically corrects errors and fills in blanks in crappily subtitled movies...

regardless, glad you enjoyed this one, there's some really great moments, although jordan chan rolling out of a suitcase, lit cigarette in mouth has to be one of my al time favourite moments of throwaway comedy. blink and you'll miss it...

Dan, yes that is a great moment, it's such a cool film I will probably revisit it pretty soon.