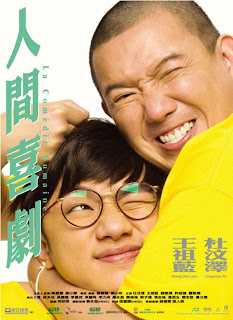 La comedie humane was co written and co directed by Chan Hing-Kai who wrote Jiang Hu-The triad zone and was one of my most anticipated HK films of 2010.

When Chapman To who plays a mainland hitman Spring is separated from his partner Setting sun played by Hiu Siu-Hung (the comic relief in many Milkyway movies) they arrange to meet up on a residential rooftop. While waiting for Setting sun, Spring falls ill and is taken in by Soya (Wong Cho-Lam) who looks after him while he recovers. Soya is an unsuccessful screen writer who is shy and timid by nature and has no idea Spring is a hitman, he is also very annoying and as a result Spring makes many aborted attempts to kill him, Soya annoys even more by telling the story of his girlfriend Tin-Oi (Fiona Sit) and how they split up, it turns out that she becomes violent towards Soya as she is so neurotic about the possibilities of their relationship failing. Other subplots include a pregnant girl wanting Spring to kill the father of her unborn child and another about a film director wanting a script for a new hitman movie, with Soya and Spring being invited to a meeting with two "real" hitmen (played by directors Soi Cheang and Law Wing-Cheong). Will there be resolution to any of this before the detective on the killers trail catches up with them? 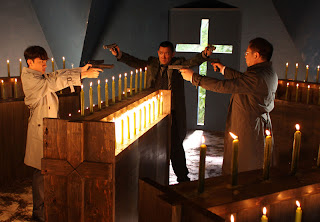 A post modern mess of a movie, the writing in La comedie humaine is occasionally clever but structurally poor, lurching from one subplot to another with no thread to sew the film together, instead it hopes that a few funny scenes will make up for a complete lack of focus,it doesn't.

As a big fan of Beast cops and Jiang Hu-The triad zone I have to wonder where the talent that Chan Hing-Kai showed has gone. The much talked about scene where Spring tells Soya a made up story of his life by using movie titles is inspired but like many things in the movie,it outstays its welcome, really labouring the joke. The best thing about La comedie humaine is Chapman To, he gives a very strong performance which saves the film from being terrible, he is a talented comedic actor and is funny in the film, his impressions of Andy Lau, Tony Leung and Donnie Yen are particularly funny. Fiona Sit also puts in a decent performance making a potentially horrible character likeable, I also thought that Hiu Siu-Hung looked suitably bad ass, well at least while he kept his shades on, kind of like an older Anthony Wong in Exiled. Which brings me to another point with the film, the movie references. Hong Kong cinema has used movie spoofing within films for many years and it is always hit and miss as to if the parodies work. La comedie humaine is no different in this regard, when it works as in the case of spoofs of Johnnie To and John Woo, it is funny and has a point, a scene outside a church looks like a deleted scene from Exiled and the scene in the church being inspired by the Killer, these both work really well but a far too long parody of The Assembly begins to grate and almost takes the film into scary movie territory.
The end of the film is quite clever and works well with a ridiculous shootout being amusing and the subsequent chase having a surreal finale that fits in nicely with the films love of film. If La comedie humaine had more focus it could have been very good, it has ambition and love of cinema coupled with a strong lead in Chapman To but unfortunately this cannot help the disappointed feeling I am left with from the film, which is that it is mostly pointless, pretentious and unsatisfying.
Posted by A hero never dies at 1:45 PM

I must admit, I didn't read the post bc I am afraid of spoilers. I am getting this movie for X-mas. I want to go in knowing absolutely nothing about it =P

I will revisit this post once I see the movie.

Let me know what you thought of it Kingwho.

Ok. Finally watched it. And it was a mess. Just like you said. At times it was fun and clever but mostly just annoying. If they stuck with the HK film nods (like The Assemby bit) throughout instead of trying to develop the characters (poorly), it might have been passable entertainment. Not a great film, but passable fun. Wong Cho-nam's character was an annoyance. How old was he supposed to be? 12? It grew tiresome really quick.

I think they were going for cute, but tiresome is much nearer the mark.