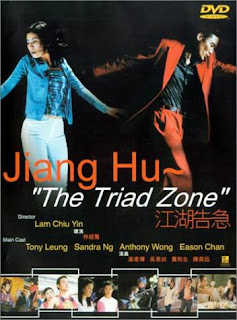 Made in 2000, Dante Lam's Jiang Hu-The triad zone is one of the most ambitious and original gangster films Hong Kong has produced, it takes many of the triad film cliches and reworks them into something fresh and funny. Tony Leung Kar Fai plays a triad leader who finds out that a hit is planned on his life sometime in the next 24 hours, he spends this time trying to find out who has ordered the hit to strike first against his enemy, but finds himself spending more time re-evaluating his life and the people in it. The most prominent of these people is his long suffering wife played by Sandra Ng. I find it incredible that Sandra Ng did not get a nomination at the Hong Kong film awards for this, she is fantastic in the role and while I think Maggie Cheung deserved the award for In the mood for love, Sandra could and should have had two nominations as she was also amazing in Wilson Yip's Juliet in love in the same year, maybe the voting was split between the two films and that went against her. I have singled out Sandra Ng here but all the cast is extremely good with great turns from Tony Leung, Roy Cheung as the bodyguard and Anthony Wong in an hilarious cameo. 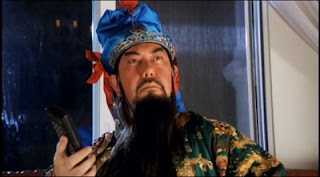 The film is very funny,it is quite serious but not completely, it has parody elements but is not a parody and most importantly, unlike many Hong Kong films, where the tone can be all over the place this is pretty consistent throughout mixing the drama with the comedy in a way that feels kind of unique. Unfortunately since Beast cops and this film Dante Lam has been quite disappointing, I was hoping he would kick on and make more interesting and ambitious films and while I liked Beast stalker, everything else I have seen has been disappointing, especially the terribly dull Fire of conscience.

The Mei Ah dvd is very disappointing being released before anamorphic dvds were common, the image is quite washed out with lots of damage and the sound has a lot of hiss, this film deserves much better and is a title crying out for a remaster, a French dvd is available and is 16:9 enhanced but does not have English subtitles.
Posted by A hero never dies at 4:47 PM

This was a very cool off-beat flick. I haven't watched it in years and years but i might have to revisit it soon. Anthony Wong's cameo is unforgettable.

A year or so ago, Achillesgirl recommended Juliet in Love and I STILL haven't gotten around to it. Shame on me.

I really like this film, and still laugh when I think about Anthony Wong as Guan Gong!

I totally agree about Lam's subsequent dumb movies. Jianghu is a real jewel.

Thanks for thecomments you two, Kingwho you really need to watch that movie and Achillesgirl I have left a comment on your BOS/JIL post and that comment begins with Wow.