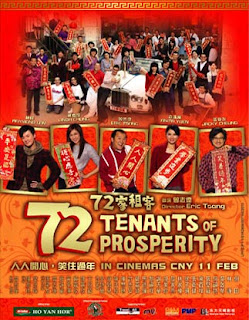 72 tenants of prosperity is a 2010 updating of the old Shaw brothers film The house of 72 tenants and was made for a lucrative Chinese new year slot in cinemas, as a result you should know going in what kind of film to expect. Made by a team of writers, co-directed by three people including Eric Tsang and produced by no fewer than five companies including Shaw brothers, TVB and UFO.

The film opens with a sequence set in 1970's Hong Kong introducing our main characters Ha Kung (Justin Lo and Eric Tsang), Shek Kin (Raymond Lam and Jacky Cheung) and Pinky (Fala Chen and Anita Yuen). We then move to 2010 and Sai Yeung Choi Street in Mongkok where the friends turned enemies Ha Kung and Shek Kin run competing mobile phone shops, they fell out over the love of Pinky when Ha Kung won the hand in marriage of Pinky on a coin toss, something that Shek Kin has never been able to get over. The bitter rivals forbid their families and workers from fraternizing with their opposites and employ ever more crazy schemes and dirty tricks to out do each other, but while fighting each other the tenants receive notice of crippling rent rises, will this force the tenants of Sai Yeung Choi to close up for good leaving the shady mainland property developers to move in? 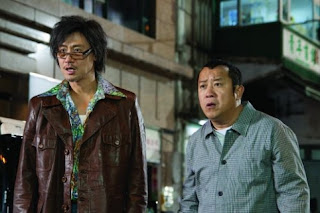 As this is a new year film while the main storyline is going on it will be no surprise to you that family members from each side fall for each other, things come to a head between Ha Kung,Shek Kin and Pinky and that the traders join forces and work together to try to keep their livelihoods safe. Do all these plot strands have a happy ending? As I said this is a new year film. It is slightly more than that though in that it does work social issues into the plot and even uses the mongkok acid thrower as a plot point.
Jacky Cheung and Anita Yuen are really good, Eric Tsang is Eric Tsang which is a good thing and I particularly enjoyed Justin Lo as the younger Eric Tsang with his impression making me laugh out loud when he speaks. Some of the TVB stars featured seem out of their depth in a film, but this does not really hurt the movie too much. What could be harmful to your enjoyment of 72 tenants is your tolerance for product placement, as I have not seen such blatant examples since the last two James Bond movies, it is so bad in this that they even make a joke of it at the end.

Going into this film I had pretty low expectations, I was expecting fluff and it is really but I found it to be entertaining fluff, the movie pretty much gets by on the cast being fun to watch, so if you don't like the actors you won't like the film. It is great to see Anita Yuen back on screen again in a comedy she really does have natural charm. Lam Suet also has a tiny but very funny cameo. One of the best things about it is that it feels like the team behind it set out to make a film for Hong Kong audiences and not worry about anyone else, which in these days of HK movies trying to be Hollywood like or pandering to mainland Chinese audiences and censors, is a refreshing change.

I saw the film on Blu ray and the image was surprisingly good, with excellent detail. Sound was fine. The dvd would be sufficient for most people but the shots of Sai Yeung Choi street look fantastic and are worth having the blu for alone for me as I love Mongkok.


Not sure what happened with the font on this one,sorry!
Posted by A hero never dies at 11:56 AM

I also liked 72 Tenants more than I expected. You make a very good point about them making it for themselves, not for others. Maybe that's why it turned out so fun.

I was never having about such things that are concern with the life of everyone from which you are concern. So that means that prosperity is the one thing for which literally you have to be careful.