I Saw The Devil 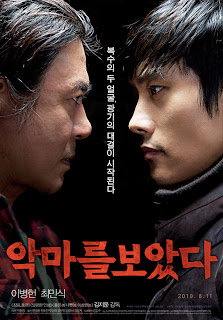 Min-sik Choi is a serial killer who chooses the wrong victim when he picks up the fiancee of Byung-hun Lee's secret agent. When her body is found the agent uses his connections and skills to hunt the killer to make him suffer a thousand times more than his girl did, but in his grief and rage will he know how far is too far? 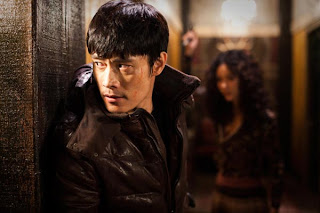 Ji-Woon Kim's I saw the devil was one of my most anticipated films for 2010, but as good as it is in many ways I found it disappointing. First Before I get into why I was disappointed the good stuff.The film looks absolutely incredible which will not be a surprise given Ji Woon Kim's other films but this one truly is a technical marvel. It has some excellent set pieces including an amazing sequence in a taxi that really blew me away. The acting is all great with Min-sik Choi being a real stand out as the psychotic killer without an ounce of humanity in him and Byung-hun Lee as the secret agent who loses his fiancee to the killer being totally convincing in his anger and descent into madness. Ji-Woon Kim toys very cleverly with the audience making them complicit in the events of the film as the killer is shown to be so grotesque you want the agent to make him suffer but at some point you begin to not be quite so sure anymore if you still want to be involved in the madness.
The film is definitely not for the faint hearted and is certainly not for everyone and Ji-Woon Kim should be applauded for not compromising on his violent vision, and although that vision is very serious in tone, a few moments of jet black humour do come through and are very welcome. 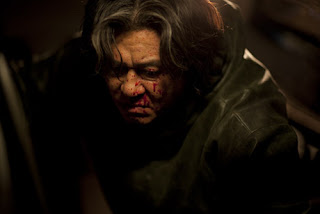 When the screening ended and I was thinking about the film, I knew I didn't love it despite all of its qualities but wasn't sure why. After thinking about it for a while the problem with the film is the one element of the story which I have not seen before in  the revenge genre (which I cannot mention without spoilers, although if you have read anything else about the film you will almost certainly know)  once the agent catches up with the killer and they face off (another fantastic set piece) Min-sik Choi is badly beaten and the agent lets him go to hunt down and inflict pain on him again, this repeats throughout the running time.  I just cannot get past the implausibility of a secret agent letting this madman free, he could just as easily have kept him prisoner somewhere and prolonged his suffering without giving him the opportunity to cause more mayhem, of course then we wouldn't have the film as it is but it is such a huge problem if you cannot accept such a pivotal part of the plot. I have left out some elements of this part of the film so as not to spoil too much but even with these parts I just didn't buy it for a second. The agent has planned this from the start and he thinks he is in control of the situation, which is how the film seems to justify the storyline but the madman is clearly just too dangerous to be set free, when the agent then sinks deeper into the madness of his own actions it is too late.

I don't usually worry so much about the plausibility of the plot within a film, for the most part realism is not what I am looking for, but the more I think about this film the more I have a problem with this aspect of it as it wants to be taken seriously and seen as something meaningful, however ultimately it says nothing new on the well worn subject of revenge. In the end it is a beautiful looking, particularly nasty exploitation film with very high production values, the violence is frequent and brutal and it does have plenty of thrills for genre fans, but I feel Ji-Woon Kim was aiming higher than that and while I did enjoy it I don't feel it achieves the heights it should have.

Email ThisBlogThis!Share to TwitterShare to FacebookShare to Pinterest
Labels: i saw the devil, Ji-Woon Kim

I guess I'll just have to skip straight to the end of this one!

Finally saw this. It is quite grisly! The person next to me walked out after the second woman was murdered. And to be fair, I was already feeling a bit sick watching those parts.

My deal which I think lowered the quality of the film for me was that the whole theme of the secret agent becoming just as brutal as the killer didn't completely gel with me as I think Kim Ji-Woon wanted us to cheer him on as much as be mildly repulsed of what he's doing, and you can't win at both.

Perhaps there was one too many killings that didn't add up to anything either, but around the time the secret agent investigates the cannibals house, the film started to cook for me. I'd say this is as strong as The Good, The Bad, and the Weird but I'd find that film much easier and more fun to watch personally. I'm sure others would disagree!

This is out on blu ray very soon in the UK and I will definitely give it another go, the quality of the filmmaking is outstanding but I do have serious issues with the story, I'll see what a re-watch does for it.